The at least 17 ministries dealing with development of people with disabilities should all specifically demand budgetary allocation for the purpose, which at present is only available for the Ministry of Social Welfare, speakers told a discussion yesterday.

The talks on the issue was organised by Bangladesh Visually Impaired People’s Society (BVIPS) with support from Sightsavers and European Union in the capital’s The Daily Star Centre.

“It is estimated that there are above two crore people with disabilities in Bangladesh but there is no comprehensive plan of action regarding their development,” said BVIPS Chairperson Mosharraf Hossain Majumder.

The country’s overall development cannot be achieved without including people with disabilities to the mainstream development programmes, he said, urging the government to increase the allocation.

Government resources are often wasted because of a lack of coordination in the government action plans, he said.

BVIPS Executive Member Rahima Patwary presented an estimated budget for each of the ministries concerned, saying the total allocation required was Tk 3,500 crore.

She added that people with special needs in the rural areas would benefit immensely if local government institutions have the money to launch the development programmes.

Stating that most public infrastructures such as roads and footpaths are not friendly towards people with special needs, she suggested allocating at least Tk 100 crore for the modifications.

Visually Impaired People’s Society (VIPS) is a national level right based disabled people’s organization established on 4th January 2005 with an initiative of a group of visually disabled and blind persons. Aim of this democratic organization is to empower the persons with visual impairment as well as persons with disabilities. 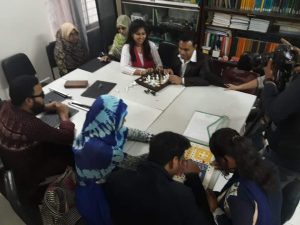