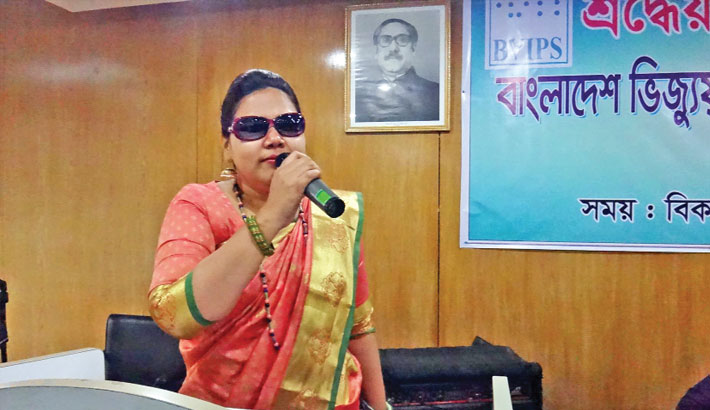 Bangladesh Visually Impaired People’s Society (BVIPS) is an advocacy organisation that works for the visually impaired graduates. The society was established on January 4, 2005 with a view to assisting the visually impaired educated persons. The founder members conducted series of workshops and meetings to form the society. One of the most needed criteria to be a member of this society is to be a graduate. As the organisation provides legal advice, works for their rights and conducts training sessions for developing different skills, thus they haven’t changed the prerequisite for the membership. Since its inception, the authority has been trying to lead the society in a transparent way. In order to do this, they have been practicing democracy in every part. They elect their leaders in every two years and no one is allowed to hold any post more than two times. The present General Secretary of the organisation is Nazma Ara Begum Popy. She is also one of the founder members of the organisation.

Despite the fact that Nazma Ara Begum Popy is visually impaired she did not choose to lead a secluded life rather she was determined to make a difference in the society. Consequently she has overpowered darkness and lived up to her expectations. Of late, Nazma has shared her success story with morning tea.

morning tea: How would you compare the activities of BVIPS with other organisations that work for visually impaired persons?

Nazma Ara Begum: The main difference is that our organisation works only for those people who are completely blind and a graduate. There is a specific reason for it. As our organisation assists in developing skills necessary to get a person established, provides legal advice and information, creates software, translates computer document in braille language and conducts training for visually impaired people, that’s why we like to work with educated people.

Moreover, we do not provide any financial support like other organisations rather we help to build their career. We established our organisation with our own finance, later ‘Sightsavers’ helped us. It is mentionable that all the people working for this organisation do not take any kind of salary or remuneration. This is a complete volunteer service which is another characteristic that distinguishes us from others.

morning tea: How was the beginning?

Nazma Ara Begum: Before establishing this organisation, we conducted series of workshops and meetings for the well-being of visually impaired persons.

We had to face several problems at that time. Due to excessive number of members and multifarious intentions, we couldn’t work according to our goal. We thought to gather all the educated visually impaired persons to create opportunities for them. Later in 2005, we established our society with the present name. At first our senior brothers mentored us. We all were very active and energetic at that time, and wanted to help our community.

morning tea: About twelve years have passed and now you are the General Secretary of the organisation. How was the journey?

Nazma Ara Begum: You know that our society is patriarchal. Here, it is really difficult for a woman to do any work and when it comes to leading such an organisation, you can understand the situation. I also had to pass tough time and struggle a lot to reach today’s position. At the beginning, very few women involved with us. There are four reserved posts for the women in our organisation. Our senior brothers always encouraged us and tried to keep us in those four posts. I was the first woman who came out of those pre-fixed four posts and was elected the joint secretary earlier. Then I wanted to be the treasurer (which was not reserved), but my senior brothers discouraged me though some of them helped me. Later I decided to participate in the election for the post of General Secretary. And with the blessings of Almighty Allah I won for the first time in 2015. After completing my first tenure everyone (even who discouraged me initially) was impressed with my works and motivated me to take part in the election again. And I won for the second term in March, 2017.”

morning tea: Tell us something about your family and personal life.

Nazma Ara Begum: Well, I am from Anwara upazila under Chittagong district. My late father was an officer of Bangladesh Bank. He retired as a DGM. I have been living in Dhaka alone since I was six years old. I have completed honours and masters from the University of Dhaka. After completing my formal education, I joined ‘Jatiyo Protibondhi Forum’ in 2008.

morning tea: Was your family supportive to you?

Nazma Ara Begum: I consider myself very lucky as my family has supported me every time since I lost my visual power at the age of six. They helped me in every step. I can remember only one instance when they did not support me. After the completion of my master’s degree my family asked me to go back to Chittagong, but I refused to do so. I was sure that it will be difficult for me to adjust there. Moreover, the job opportunities I had in Chittagong were not suitable for me. At that time my uncle supported me and convinced my parent. Except this incident my family has always supported me and I also didn’t go against their decisions.

Visually Impaired People’s Society (VIPS) is a national level right based disabled people’s organization established on 4th January 2005 with an initiative of a group of visually disabled and blind persons. Aim of this democratic organization is to empower the persons with visual impairment as well as persons with disabilities.